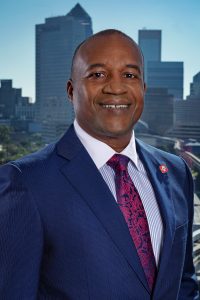 Ford is a champion of multimodal transportation, walkable neighborhoods, public-private partnerships and transit-oriented development; and known for industry-leading insights and thought leadership on international transportation issues from trade and study missions around the world.

In the eight years he has been in Jacksonville, Ford was chairman of the City of Jacksonville’s 2015 “Step Out: Walk to Stop Diabetes” campaign and the 2016 recipient of the Jacksonville Urban League’s Clanzel T. Brown Sr. Award. He was also recognized by the Jacksonville Council of the Blind at its 2016 annual White Cane Ball.

Ford serves as vice chair for the Transportation Research Board’s (TRB) Executive Committee and is the incoming Chair for 2022. His role at TRB includes serving as chair of the International Activities Subcommittee. Ford also represents the JTA on the JAX Chamber Board of Directors and is a member of the Jacksonville University Master in Public Policy Minority Fellowship Board of Advisors. He serves as member of the Executive Advisory Board of the SMART Mobility Laboratory Consortium. He is the past chair and a current member of TEAMFL’s Board of Directors.

Under Ford’s leadership, JTA employees have embraced community causes including the Clara White Mission to feed the homeless and Sulzbacher Village. Through the JTA Cares initiative, JTA employees have also established “Career Closets” for men and women that provide professional attire so they can seek new employment.  The Authority has also started an internship program to prepare college students for careers in transportation.