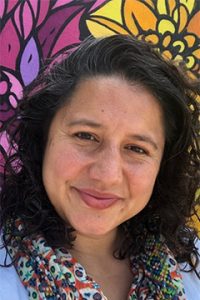 Jessica “Jessie” Buendia is the National Director of Green for All (G4A), an initiative of Dream Corps. G4A works at the intersection of the environmental, economic, and racial justice movements to advance solutions to poverty and pollution.

Before coming to G4A, Jessie served as the Acting Executive Director/Chief Deputy Director of the California Strategic Growth Council (SGC) under the Governor’s Office of Planning and Research. SGC promotes sustainability, health, and equity across the State by helping California achieve its climate change and racial equity goals through place-based, community-driven infrastructure investments and transformative programming. At SGC, Jessie oversaw a $1 billion annual budget and launched two new programs, the Community Assistance for Climate Equity Program and the Health and Equity Program that expanded SGC’s reach and impact in communities across California and propelled SGC as a leader on equity at the state level.

Jessie currently serves on the board and executive teams of the Fem the Future Foundation and the East Bay Community Law Center. She has held positions at the San Francisco Public Utilities Commission, San Francisco Foundation, Health Access Foundation, Rose Foundation, California State Legislature, Urban Habitat, and the Greenlining Institute. She has also lived and worked in Mexico, France, India, and South Africa.

Jessie has a Master’s Degree in Public Policy from Princeton University, an Advanced Project Management Certificate from Stanford University, and a Bachelor’s Degree from Macalester College. She is a certified coach with a focus on building transformational leadership within the social justice sector. She is originally from Iowa and currently resides in Sacramento with her wife and toddler.