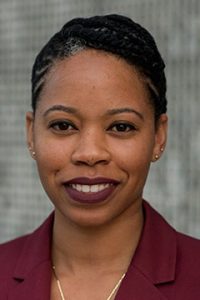 Justine Johnson is a proud native of Los Angeles, California. For the past eight years, she resided in New York City working on transportation initiatives under the Bloomberg and deBlasio Administrations. While at the New York City Taxi and Limousine Commission (TLC), she worked on the “Boro Taxi” initiative, also known as the Green Taxi program, which created a new for-hire vehicle and driver classification. Following her work at the TLC, she moved to the New York City Economic Development Corporation managing government and community relations for Mayor de Blasio’s new commuter ferry system called NYC Ferry.

In 2018, she joined Ford Mobility’s City Solutions team and is working with municipalities and communities on mobility solutions that help move people and goods more efficiently and effectively throughout the SoCal and Southwest region of the United States.

Justine holds a Bachelor’s Degree from Hampton University and two Master’s Degrees from the University of Southern California.